A Look at Charismatic Worship

*This post is a group project for a seminary class, Worship Leadership. Zach Spann and Paul Corley contributed to this post.

Don Williams, in Exploring the Worship Spectrum, provides a theological definition of charismatic worship “as worship where the leadership and gifts of the Spirit (charismata) are evidenced or welcomed in personal and corporate praise, responding to a mighty act of God” (139). From that perspective, charismatic worship can trace its existence back to the early church, with particular interest given to passages in the book of Acts and 1 Corinthians. Those who practice a charismatic form of worship may be broadly termed continualists because they believe the “sign gifts” have continued.

Though the roots may be traced back to biblical times, many frame the modern charismatic movement through the lens of recent history and trends. There have been various strains of continualism that have led to charismatic forms of worship in America: Pentecostal, charismatic, and Third Wave believers. Williams points to the Azusa Street Revival in 1906 as the foundation of American Pentecostalism. The charismatic renewal took place in 1960 with Dennis Bennett‘s declaration that he had experienced the baptism of the Holy Spirit. Then, the Third Wave would take place in the 1980s with the ministries of John Wimber and C. Peter Wagner.

Each of these movements differed in their focus. Azusa Street served as the birth place of modern Pentecostalism. The charismatic renewal, however, swept through many of the mainline denominations (in particular the Episcopal church) and led to a restructuring of those churches. The Third Wave, in turn, saw its influence as slightly more subtle than the other two. For instance, the Third Wave “no longer demanded speaking in tongues as the sign of the Spirit’s baptism” (Williams, 142).

Those outside the tradition associate charismatic worship with more ecstatic, free-flowing worship gatherings that may seem somewhat disordered or chaotic. Yet, Williams cites Wimber in claiming that the goal of charismatic styles of worship is to connect the congregation with God by singing songs directly to God rather than about Him (142-3). Charismatic leaders design every worship gathering with seeking an intimate encounter with God in mind.

In order to reach that goal, worship leaders moved away from the eighteenth and nineteenth century hymns that seemed stilted, which inhibited the worshipers connection with God, in favor of newer songs designed to be played like rock songs. The charismatic renewal of the 1960s often merged with the Jesus Movement and gave birth, in some ways, the contemporary worship movement (Williams, 142).

The charismatic movement has had a huge influence on Christian worship, with nearly “eighty percent of all white Protestant churches in the United States” including songs from Wimber’s Vineyard churches (Williams, 143). 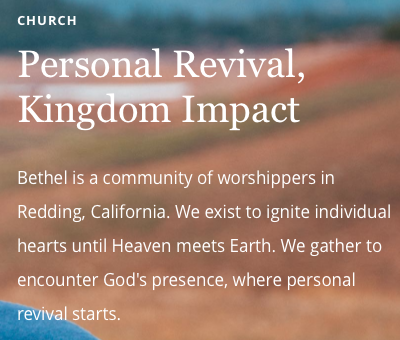 In the last decade, that influence has only grown. Worship bands such as Bethel Music and Jesus Culture have written and produced songs that churches all over the country sing. These two music groups both arose within the charismatic Bethel Church in Redding, California. Their perspective on worship can be summed up in the leftward graphic, which was captured from their website.

Ultimately, charismatic Christians make up 14% of the global Christian population. Together with the Pentecostal movement, they make up 26.7% of self-proclaimed Christians. So, presumably, over a fourth of the world’s Christians worship following one form of the charismatic model or another. So, Christians from each denomination should learn about the charismatic movement and its form of worship.

To best understand the elements of charismatic worship, the theology of it must be examined. Don Williams links charismatic worship to all others in its aim at worshiping and interacting with the whole Trinity (145). However Williams claims it is this worship style that has “restored” the Holy Spirit to Christian Worship services. A huge element of this style is not only including the Holy Spirit, but an emphasis on the Holy Spirit. An acknowledgement of this member of the Trinity guides and directs the components that make this style stand alone in many aspects (class material).

Williams explains that this emphasis is not exalting the Holy Spirit over the other members, but instead through giving the Spirit proper attention, holding all three members in the prominence that is appropriate (145). Elements that are common to most brands of charismatic worship are service structure, Spirit baptism and miraculous gift usage, and music style. Analyzing these components allows for fair generalizations of charismatic worship.

Service structure is a defining characteristic of this style. A stereotype from many charismatic services attributes an approach devoid of plan. It would be better understood however as a planned effort with room for the Spirit to move freely (Walrath, 14). This means that, although the service may begin with a certain structure in mind, the order of worship could quickly change in response to the Holy Spirit. Williams and others explain this as the vitality of this worship style, keeping worship “fresh and exciting.” Adhering to a strict order or time-limit becomes extremely difficult within the charismatic style.

Another, perhaps more well-known emphasis, centers on manifestations of the Spirit through baptism and gifts. Theology heavily affects this style here and separates it from others as many charismatics view the Spirit-filling of a believer as a separate experience. However, it must be noted that there is much variance among this style as it represents many denominations as well as independent churches.

Nevertheless, the charismatic worship style shares an acceptance and encouragement of the more miraculous gifts, such as: speaking in tongues, prophecy, and healing. Williams claims that this makes the worship this style accessible to all who attend, leaving no by-standers (146). Williams does emphasize that there has to be order and organization in the implementation of these gifts.

Music style is another common staple in charismatic churches. Readers are given several examples of songs that have characterized and continue to influence charismatic worship in Exploring the Worship Spectrum. Although Williams speaks of some today using hymns in charismatic worship, most will find music running parallel to the music of the contemporary worship style found within numerous churches.

Charismatic services are commonly led by worship teams with multiple instruments and/or singers. Songs are typically simple in structure and lyric, repetitive, and address God or the Spirit directly. It would not be uncommon for worshippers to not only sing along, but also to dance, clap, lay prostrate, or engage in other physical acts of worship. 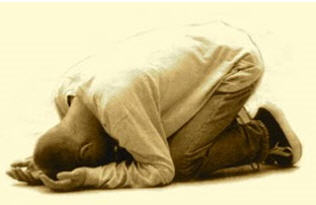 A song with a verse and chorus might begin with a general plan but could last thirty minutes with several builds, interludes, and bridges with possible prophecy, prayer, or tongues interspersed throughout the song. Music serves as a vehicle for many forms of praise in the charismatic style, and will generally receive as much if not more time as preaching and teaching.

Don Williams writes, “The gift of “charismatic worship” to the church has been functionally to restore the Holy Spirit to our services” (145). Charismatic worship calls the Church to return to genuine worship, which can’t deny the importance of the Spirit. John 4:24 states, “God is spirit, and those who worship him must worship in spirit and truth.” The heart behind charismatic worship is biblical in desiring true genuine worship that must involve the Spirit. Worship in churches can be dry and disconnected from God. There is a clear need for an openness to experiencing God through the Spirit in worship.

Dr. Ken Matto states, “A person is baptized in the Holy Spirit at the moment of salvation which means their sins are washed away, it does not mean you speak in unintelligible garble.” The danger of charismatic worship is not only that it puts more focus on outward expressions of the Spirit but also that it undermines the presence of the inner working of the Spirit. All through Scripture, God focuses on our hearts and the inner transformation that takes place. Recently, I talked with a convert to First Pentecostal Church of Jackson, MS, and they stated, “How are you supposed to know if you have the Spirit and are saved if you have no outward expression of tongues?” This was a stunning statement when the very fruit of the Spirit listed in Galatians 5 are all a matter of the heart. Charismatic worship becomes a modern day Pharisee-type worship focusing not on the heart but outward expressions.

Charismatic worship, in its attempt at restoring the Spirit to worship, has purely focused worship on the experience a person has and not the God whom we worship. Sally Morganthaler in Exploring the Worship Spectrum writes, “in a recent study of two hundred songs regularly used in charismatic worship services, only thirteen focused on the person or work of Christ.” (169) Outward expressions of the Spirit in worship are for nothing if Jesus is not magnified. Paul states in Philippians 2:9-11 “Therefore God has highly exalted him and bestowed on him the name that is above every name, so that at the name of Jesus every knee should bow, in heaven and on earth and under the earth, and every tongue confess that Jesus Christ is Lord, to the glory of God the Father.”

What is the outward expression without a heart for Jesus? How can you truly experience the Spirit and presence of God if not with a heart for Jesus? Believers need a true experience of Jesus in their lives that produces worship in the Spirit that manifests itself in the heart producing life transformation. Paul states in Romans 12:1 “…present your bodies as a living sacrifice, holy and acceptable to God, which is your spiritual worship.” Casting Crowns sums this up best in their song “Lifesong.”

“Let my life song sing to you.”

I hope to provide my readers with thought provoking commentary from a Christian perspective on various topics and ideas. View all posts by brandonelrod

One thought on “A Look at Charismatic Worship”

Brandon is a student of ministry and Christian theology.

To live and to breathe and to seek in the rolling depths what lies beneath. To not be afraid to ask tough questions and to not worry about trekking through harsh climates in order to find the answers. To live as Christ. To die as Christ. To follow His lead as He died for you and for me.